This behind the scenes episode is about one of the key characters who is the heart of the Tech3 team along with Hervé Poncharal. Guy Coulon operated as the crew chief until the end of 2020 and has been present since 1989 with Tech3 whilst working with a whole host of successful and talented MotoGP riders. His extensive knowledge of motorcycles and vast experience has seen him transform the riders into thoroughly competitive athletes. Guy also proudly stands as the head of development for the team’s self-designed and made Mistral 610 bike, which was competing in the Moto2 World Championship from 2010 to 2018. 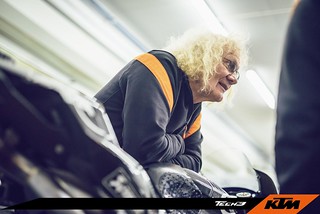 Since a young age, Guy’s whole life has been dedicated to racing due in part to the fact that he grew up close to the Le Mans circuit where he first visited the 24 hours of Le Mans Moto race at the age of 5, which later became an almost annual ritual. He fulfilled his dream of becoming a full time motorcycle race mechanic in 1974, after working in the Paris-Dakar rally for a number of years as a technical director. This was before establishing the Tech3 Team in 1989 with Hervé Poncharal, who together undertook their first season in 1990. There was no doubt from the early stages, about the different roles Guy and Herve would have to perform due to their dedication to competing professionally. Guy is a well-respected and integral figurehead in the world of racing and obtains a profound, in-depth level of knowledge about motorcycles which he has based his life upon. He has worked with a vast array of bikes including different manufacturers and engine sizes such as: the 1989 Paris-Dakar winning NXR750, or the 1987 Le Mans 24 hour Endurance NR750. This is in addition to the differing kinds of Yamaha which have been running in the MotoGP World Championship during the past years, from 250cc to 500cc two strokes, 800cc four strokes up to the recent 1000cc 4 strokes. His love of motorcycles sees him preparing classic bikes at his home during his free time, as he continues to bring success and expertise to the technical side of Tech3.

Guy undertakes much more than just being a crew chief, however in this role his main responsibility is to establish and provide a competitive setup of the MotoGP bike working in close collaboration with the rider, the data technician, the suspension specialist, tyres manager and KTM engineer. As he interprets the rider’s thoughts, Guy proceeds to suggest and make technical decisions with his enormous engineering knowledge to extract the maximum performance from the Tech3 KTM Factory Racing rider and the machine. He ensures that the riders recognize the changes that are made as well as providing suggestions on how to alter their riding styles, working in conjunction with the team to achieve the best results with the KTM RC16. Guy has worked with many successful MotoGP riders and has enabled them to deliver top results during their time at Tech3 including; Olivier Jacque who he won the 250cc world championship with, Marco Melandri during his second season in MotoGP, two-time World Superbike Champion Colin Edwards, 125cc World Champion Andrea Dovizioso as well as Bradley Smith for four seasons, with the 2015 and 2016 Moto2 World Champion Johann Zarco and for two years with the talented Miguel Oliveira.

Guy’s determination, vision and perseverance sees him as a chief motivator in enabling the best decisions to be made for the growth of the Moto2 and MotoGP projects as he enters in 1974 in motorsport. His calm and collective manner coupled with his creative ideas for the team see him as the life and soul of the Tech3 team. In addition to his immense technical knowledge of motorcycles, Guy designs the hospitality units which are then manufactured by the team, illustrating his deep understanding of engineering inside as well as outside of motorsports. His experience and wisdom brings out the best in the riders and the bikes for Tech3 where he performs critical roles, which aid the team with reaching success on the track.

The following documentaries in the ‘Insight’ series will give further exclusive access behind the scenes.