On the second and last day of the official IRTA test in Valencia, Hafizh Syahrin and Miguel Oliveira progressed significantly aboard their KTM RC16 machines. Following a partly wet opening yesterday, both KTM Tech3 Racing riders were able to put in some more kilometres on a dry Circuit Ricardo Tormo.

Syahrin, who’s just about to start his second season in the premier class, used the available track time well to get to know his new working tool better and better, which was obvious in his lap times as he went 1.225 seconds quicker than on Tuesday. Meanwhile, MotoGP rookie Oliveira approached the new category further and lowered his lap time by 1.32 seconds after 46 laps throughout his second day.

With the conclusion of this first test in preparation of 2019, the KTM Tech3 Racing crew is already on the way to Jerez de la Frontera to take part in the second official two days pre season test from next Wednesday.

“Overall, we had a decent test. I didn’t look at the lap time these two days, but tried to feel good on the bike, to get used to it and to understand the electronic. On the first day, until we didn’t touch anything on the bike, but this afternoon we changed some things on the front and the rear, which was positive. Later today, it was quite cold and we used the medium tyre. I had a small crash in turn 10, but I was in a good shape and had a good rhythm to understand the bike. We try to continue working hard and to understand, also for the team to learn the new electronic. I hope we have some great weather in Jerez and aim to improve with every session.” 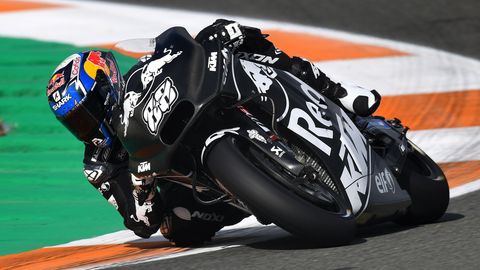 “Today we definitely made a step forward compared to yesterday and improved our lap time obviously. We did much more laps than yesterday and just continued to work on the bike. Toady we started to touch some areas, after we had basically the same bike throughout the day on Tuesday. Now we were able to make some changes. Because everything is new, it took the team a bit of time to make these changes and also to adapt my comments from what I wish to have from the bike, so it’s a learning curve for everyone in this particular situation. So far, it has been positive.”