The Monster Yamaha Tech3 duo showed a solid ultimate Grand Prix of the 2018 season today in Valencia. Both, Johann Zarco and Hafizh Syahrin did brave to get through a very tricky race that was held in two parts on a soaked wet circuit.

Zarco came off the line decently from the fourth row of the grid and progressed during the first 13 laps until he reached P5. Following the interruption because of too much water on track, the French star did brave to stay upright in scorching conditions and crossed the line in seventh. With it Zarco scored 158 points overall this season to end his successful first two MotoGP years with Monster Yamaha Tech3 as the best independent rider in 2018.

On the other side, Syahrin did a great job as well. In the first part of the race he made up position by position, after finishing the first lap in 21st, he concluded the first part in P10. In the remaining 14 laps, the MotoGP newcomer was fighting the persistent rain, put his head down and reached another fantastic top 10 result to finish his first year as the second best rookie of the classification. 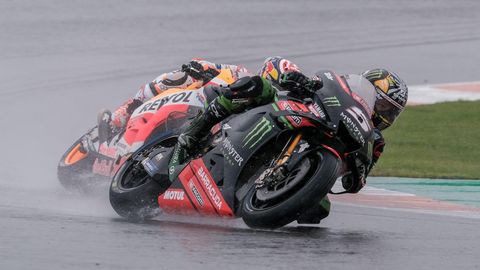 "It has been a tough Sunday. We had a lot of rain in the grid and I got a good feeling on the first start. The rain was so strong and the level of the water on track was pretty complicate to control. We saw many crashes happen. I could do my laps and have a good position. After the restart the others were faster than me and I could not follow them, but the target was to finish the race, be the first independent rider, which was our main goal at the beginning of the year and I’m so happy I managed to fulfil it. It’s pretty good for me and the team, plus our history with Yamaha, because we did the last two years on a very great level. I’m really proud and happy about that situation. It was possible to fight for the top 5 in the championship, but this weekend, Alex Rins has been very fast. He rode perfectly, so congratulations to him! He deserves this position. Finally, I want to say, thank you to everybody for the two amazing years I had together with Tech3. I’m happy about the move for next year, because we will still share very good moments, even if we are not in the same garage during the race weekend." 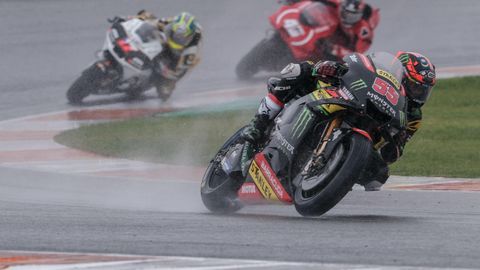 "First of all, I just want to say thank you very much to my team. We didn’t expect, that we can arrive in the top 10 in wet conditions. There was a lot of drama, many riders crashed. We stopped the race and I was in P10. We believed that we can give a challenge to the other riders. For me, it was the first time, that I could do a full race in the wet, I learned many things. In the end, I’m just four points behind the best rookie, Franco Morbidelli. Congratulations to him! Anyway, I did my best. I want to thank all our sponsors, all my family and fans, that come to support me. I’m really happy to be here in MotoGP. Next week we start a new journey and I will keep on working hard. Thank you very much to everybody!"

“Finally the 2018 season is over. It was almost a season that never wanted to stop, because we thought we would have our last start in Valencia and then we had another start. So, as I was telling some of our guests, don’t complain, you have two starts for the price of one. Anyway, it’s been in a way a difficult weekend, because the weather was not what you expect for the big finale, not what you expect in sunny Valencia, but at the end of the day, it made it very exciting, very unpredictable, of course with a lot of crashes, when you have so little grip. But overall, I think it made the races maybe even more interesting and exciting than what it would have been in the dry, because you saw some strange results and a different podium. I want to say, that I am very happy and very proud that for the second year in a row Johann Zarco managed to clinch the best independent rider, sixth in the championship. I think this is quite an achievement. Today he was again the first Yamaha. I know we were not the fastest, but it was important to stay on your wheels today and finish the race and this is what Johann did. Two years ago we started the adventure with Johann Zarco and Jonas Folger and after two years with Johann we are twice best independent rider and last year’s rookie. I think we did a good job together and I’m proud of what we have done. I just want to thank Johann a lot for his two seasons with us. He has been a very professional rider, he has been fast, he has been clever and I wish him good luck for his new challenge. On the other side, Hafizh Syahrin had a tough weekend, because he almost never rode the MotoGP bike with the Michelin tyres in the wet, so it was a good weekend to learn and I think he learned a lot. His nickname is ‘Pescao’, which normally means fish and usually a fish is happy when you have a lot of water. But clearly, although tenth position is maybe not what he was dreaming of, but I think he had a solid weekend and from FP1 on Friday to today the improvement of his riding style, of the gap to the top has been unbelievable. Clearly, this guy has a very special feeling on the wet and the feeling he was having in the Moto2 is coming in the MotoGP. I’m also very glad, that he could witness how good his future bike is on the wet condition, because this is a big challenge for all of us. Hafizh is part of this challenge and from Tuesday morning we will start a new chapter of our life as a team. Before ending my quote, I would like one more time to thank Yamaha a lot from the bottom of our hearts from the whole team, our two riders: big, big thank you to everybody, Yamaha management, engineers, because all what we’ve done during these last two seasons with Johann and this year with Hafizh has been possible because of the great support we had from Yamaha. So, this is the end, again thank you very much.”