Monster Yamaha Tech3 star Johann Zarco delivered a strong performance on Saturday in Valencia. In the third session of the weekend, he set the fifth fastest time and therefore, was the only Yamaha rider of the field who went straight to Q2. He displayed his strong pace again with clinching P2 in FP4. During Qualifying, he was on his way to take over the top spot, but unfortunately went down in turn 10 and now has to find his way back from the fourth row on Sunday.

On the other side of the Monster Yamaha Tech3 garage, Hafizh Syahrin experienced a decent second day at the Spanish track. In wet FP3, he improved his best time from Friday by nearly two seconds and conquered an impressive eighth position by the end of the fourth Free Practice. Later on, he was fighting on a mostly dry line in Q1 to eventually end up in 11th, which means he has to start the ultimate Grand Prix of the season from the seventh row of the grid at 14.00 local time tomorrow. 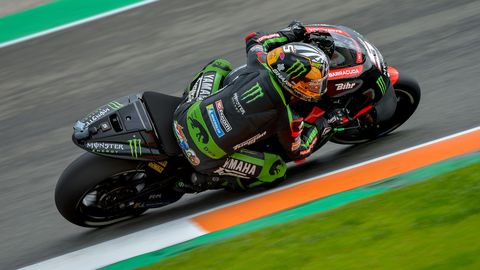 "Saturday in Valencia has been a good day. In FP3 we did some great work with the team and I could manage the decisive practice well, caught a top 5 result and made it to Q2. So I was happy, but at the same time there was not so much water on the track. This gave me great confidence, although the bike was not perfect. In the afternoon, we had dry conditions. I enjoyed it and was quite competitive. I began the Qualifying not too good, because something was missing on the bike. We tried to change it a bit to get an enhanced feeling. When I restarted with the second new tyre my feeling improved immediately a lot. I could control the bike better, but trying to be fast on the first flying lap, I crashed in turn 10. It’s a right corner, so maybe the front tyre was still a bit cold and also because the conditions were not 100 percent clear. It’s a pity, because the potential for the first row was there today. Now we start in 11thposition. Anyway, we will see what happens tomorrow and hope to have a strong race from the beginning to the end in order to play with Danilo Petrucci and Alex Rins." 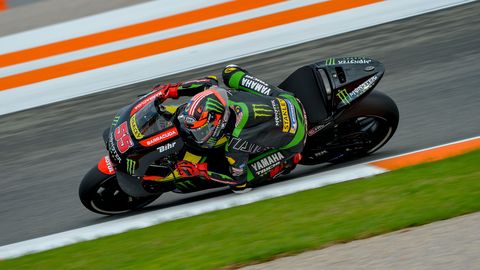 "We had a good Free Practice four and also found a great rhythm this morning. In Qualifying, the conditions were quite difficult, as it was mixed. Anyway, I know that we are always working hard. It was not easy to turn the bike in the corners, which made it tough to control it in the exit and therefore we lost a lot in terms of corner speed. I hope we can make one step forward tomorrow in the Warm Up, if it’s dry. In case it’s wet again, we continue working in our direction, because now we started to find a good way on wet surface. I hope we can improve in the morning to have a great last race of 2018."