Zarco and Syahrin prepared for the farewell round of 2018

Monster Yamaha Tech3 rider Johann Zarco is back in the fight for the best independent rider of the 2018 season following his glorious come back to the podium in Malaysia a few days ago. Thereby, the fast Frenchman leads the internal championship fight with 149 points ahead of Cal Crutchlow (148 points) and Danilo Petrucci (144 points) on his way to Valencia, Spain. Zarco eagerly awaits the final battle in Monster Yamaha Tech3 colours.

Meanwhile, Hafizh Syahrin showed a heroic ride to 10th, starting from the back of the grid for his home round at the Sepang International Circuit. The MotoGP newcomer arrives at the 19th round of the season with the mathematical chance to still clinch the Rookie of the Year award, but knows that a 10 points difference to Franco Morbidelli will not be easy to overcome.

The Gran Premio Motul de la Comunitat Valenciana marks the last Grand Prix for Tech3 in partnership with Yamaha following a successful 20 years of cooperation. The weekend commences with FP1 at 9.55 local time on Friday. "With the podium I got in Malaysia I arrive in Valencia with a bright smile on my face and happiness in my head to get another great result. My main target is to be the first independent rider and maybe a little bit more. If I can conclude the season in Valencia on the podium in front of Alex Rins and Danilo Petrucci, would mean I can also be inside the top 5 of the final Championship standings, which could be a very nice target. But first of all, I hope for nice weather and a decent temperature in order to gain confidence on this circuit and I think the Yamaha can work well there. With my guys, we found some good things during these overseas races, so we need to make the bike work well again with all we understood and in case we succeed, I’m sure we can have a great weekend. My fingers are crossed to finish this 2018 season as well as possible." 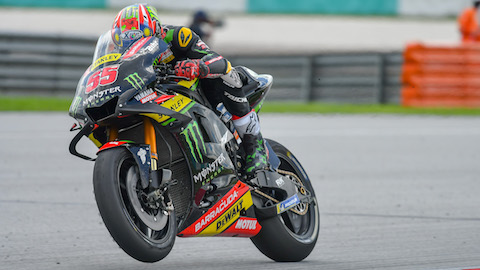 "I’m looking forward to arrive in Valencia. Now I’m just focussed to improve myself and I aim to do a great race before the end the season with Yamaha. I just want to be in front of all the rookies for the last round. I can’t wait to come to Valencia in a good position. I feel ready and hope everything is going well during this upcoming weekend."

“I can’t realize we are already heading to Valencia, which is last Grand Prix of the season. Every year we say the same, but this one sure past so quickly. This is almost a shock having to be ready to finish season in Valencia again. Valencia is always very special and important race at the end of season. Sure, everybody wants to end up on a positive and high note. Last year, we had a dream weekend with Johann being so strong in the race, having lead for most of it and fighting with Marc (Marquez) and Dani (Pedrosa). We had a great result, but also a little bit bitter feeling not to finally win that race, because I think that race we were really thinking about the possibility of a win. Anyway, we ended up second, which was a great way to finish the rookie season for Johann. This year on top of the fact that it is the last race of the season, both Johann and Hafizh will end up on a positive note, you can not forget that this is going to be last race for Tech3 and Yamaha after 20 seasons with Yamaha Japan. It has been an honour for us, a great journey, we did some fantastic achievements and although it’s our decision to move and change, this will clearly be a very emotional race for us. I’d like to take opportunity to thank everybody at Yamaha Motor Cooperation Japan for their support, their friendship, their dedication and their understanding on our side to allow us to have grown. Clearly, without Yamaha Tech3 wouldn’t be what it is now. We helped each other for sure, I always say, that success comes through stability and this is shown by our relationship with Yamaha. Normally we always say, that we can’t wait to be there, but at that points, I’d like to say, that I hope both, Tech3 and Yamaha will enjoy these last four days a GP lasts, that we’ll still enjoy each other, have fun and hopefully deliver a great result to end this unbelievable partnership on high note.”