Starting from the first place of the grid, Monster Yamaha Tech3’s Johann Zarco came off the line well and was on an impressive pace from the word go. For 20 scorching laps, he was following the top and eventually fought the heat to be back on the podium with an amazing third place. Thereby, he was the fastest independent rider and retook the lead in the independent riders’ championship before the last round of the season in Valencia.

However, on the other side of the Monster Yamaha Tech3 garage, Hafizh Syahrin delivered a sensational start, making up 11 positions in the first corners. In the course of the very demanding and hot race, the local hero fought his way up to 10th place and pleased his home crowd with a breathtaking top 10 result. With it, the Malaysian MotoGP newcomer closes up again on Franco Morbidelli in the fight for the Rookie of the Year title, but still sits 10 points behind his opponent. 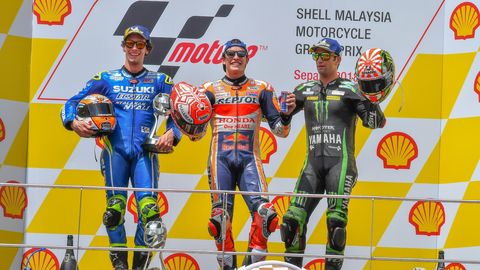 "I’m pretty happy, it was a fantastic race! But also difficult like usually in Malaysia. I was tired at the end, but the energy is coming back already. I think the key for that podium was the beginning of the race. I was thinking about overtaking Valentino (Rossi), but he was fast and it was good to be behind him. I could go away, but did a little mistake, when Marc overtook me. I tried to stay behind Marc, had a little gap, but was able to keep a good pace and then Valentino crashed, so I was second. I thought I can control, but four laps to the end Alex (Rins) was faster than me. Even if I was controlling the race well, when I tried to push a little bit more on the last laps, but I just got three tenths faster, which was not fast enough to keep the gap. He overtook me on the last lap. I tried to fight again, but I didn’t have any rear grip anymore. Anyway, the third place is a good finish." 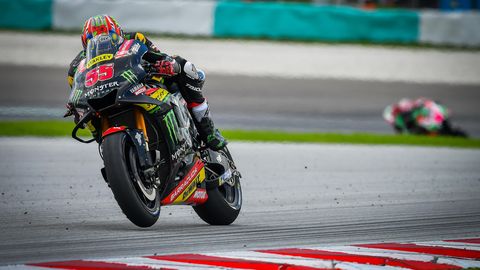 "It’s just unbelievable! First of all, I want to say thank you very much to my team, because they always believe in me and give me great motivation. Yesterday has been a disaster for us, but we made up for it. In the starting grid, I saw my father and was just emotional and had to hug him. I want to thank everybody that came here. To arrive in the top 10 for my home GP was my target, but to be honest, I didn’t believe it was possible. But in the end, we did it, which is incredible. I want to thank everybody; I love my family and my fans. I’m so happy!"

“What an unbelievable day today here in Sepang Malaysia. I think the race direction took the right decision to move everything forward two hours. We had great sunshine, a beautiful race and regarding Monster Yamaha Tech3, I’m very proud. For Johann, after getting that great pole position last night, he got a great start, put his head down, followed Valentino (Rossi) for quite a few laps, then Marc (Marquez) came into that group and this trio has been almost leading the race for two thirds, then Johann dropped a little bit, but he was always in contention for that so dearly awaited podium, where we haven’t been since Jerez. I feel very sorry for Valentino, but he crashed, although I think he was doing a great race. At that moment we thought, the podium is almost in the bag and second position was quite easy and then we saw Rins coming from nowhere, doing incredible lap times. Congratulations to him. He passed us, but we are anyway very happy with the podium, a really strong weekend. It was a tough day today with the heat, with managing the body for the riders and also the tyres, so this is great. We are now leading the independent riders’ championship, which is the main target for us now – in fifth, joint with Alex Rins, so Valencia is going to be something to challenge for us. But of course, this is only one part of the garage. On the other side, I was feeling very sorry last night after Qualifying for Hafizh, because I know how important this Malaysian Grand Prix was for him. I know the effort he put in to reach MotoGP and finally for his first home GP he was so disappointed, so sad. I tried to cheer him up this morning, I tried to cheer him up on the grid and – I don’t know if there is a link in between what I told him and what he did, but the start was unreal. Maybe one of the best starts I’ve ever seen, at least this season and from that moment he was fighting with Miller, Petrucci and even Viñales at some stage. He finished the race in 10thposition, which is a dream for us and for him and I’m so happy, because Hafizh is not only an incredible team player, but he is a charming young man and he is the best ambassador Malaysia could have in MotoGP. I could feel how disappointed he was to see all the people coming to support him and him not delivering. Finally he did deliver and this is the cherry on the cake. We are going to fly back home after five weeks on the road, but we go home happy, positive in mind and ready to challenge what we have to do in Valencia.”

Following four solid Free Practice sessions, Monster Yamaha Tech3’s Johann Zarco went all in during Qualifying this afternoon, which was delayed due to heavy rain at the Sepang International Circuit. Thereby, the fast Frenchman struggled on his first exit, but went out with a different tyre combination for the second turn and did a stunning lap time of 2’12.709 minutes on wet tarmac to eventually find himself in second, clearly ahead of his Yamaha colleagues and his fellow independent riders’ championship contenders.

Meanwhile, Hafizh Syahrin found some great sensations in FP3 this morning. The local hero lowered his best time from Friday by 0.861 seconds and climbed up the order. After he did equally well in the fourth Free Practice, he struggled to find his confidence in the wet Qualifying. Therefore, the Malaysian rookie will have to start his home race from the eighth row of the grid tomorrow at 13.00 local time (6.00 CET). 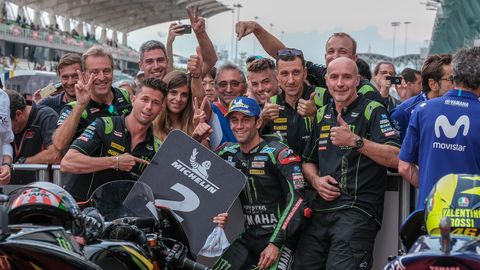 "We started with soft-soft and could see that Aleix (Esparagaro) went well with these tyres. I tried to do it, but it didn’t work and I said to myself, it’s not normal that I’m that slow. So I stopped to change to the other bike and asked to put in the medium rear. We already planned to use the harder front tyre. From the first lap, I knew something is possible. On the last lap, my feeling was great, but I was sliding on the rear in turn three and in turn four. I got quite some signals and lost a few tenths, so I wasn’t sure if I could have done the lap time of Marc (Marquez). Anyway, it was great. I enjoy the second place and wish for a podium tomorrow." 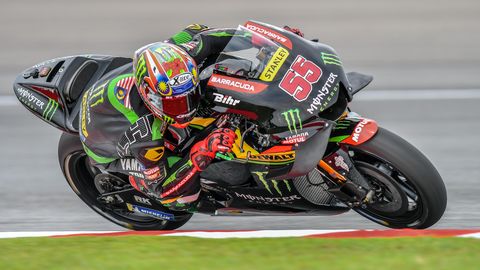 "I just feel really sorry for the team, because I couldn’t do my best. I felt a lot of spinning from the bike and I’m disappointed from myself. Anyway, I will try my best for the race tomorrow, which will be a totally different day. Now we start to understand which tyre we need to use. I just want to enjoy it and do my best. I hope I can give my best for all my supporters that are coming here. I just look forward to the race and will try to improve from the back of the grid. I didn’t have any experience in the full wet conditions and I learned that it takes time to understand it. I’ll fight on race day!"

Johann Zarco kicked off the Malaysia Motorcycle Grand Prix today in strong form. The fast Frenchman initiated the hot and humid weekend with a fast pace in FP1 this morning and improved on his quickest time later by 0.567 seconds on the last lap of the second Free Practice to conclude Friday with a provisional Q2 position in eighth.

His Monster Yamaha Tech3 teammate Hafizh Syahrin, who is the only rider of the permanent MotoGP field, who haven’t had a test this year before the Grand Prix at the Sepang International Circuit, had the difficult task to make up for this in just two sessions today. The local hero managed his mission well to miss out on the top 10 by just 0.867 seconds before FP3 at 10.55 local time (3.55 CET) tomorrow decides about the Qualifying entry. 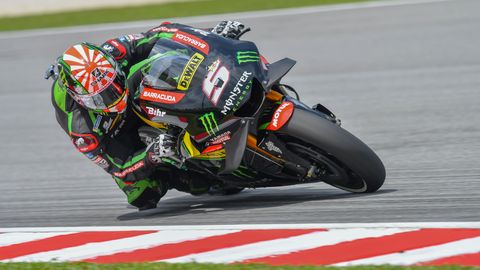 "The first day in Malaysia has been very difficult for me. The base we had, even if we did the winter test, was not working here and I was pretty slow. Fortunately at the end of the session this morning, I could improve my lap time and be inside the top 10. Also in the afternoon I was in the top 10 at the end of the practice, but we are struggling a lot with the traction, with the rear grip. We try to work on it, but we couldn’t find a good solution yet. Therefore, I’m a bit worried for the rest of the weekend. I keep pushing, though it’s just another experience to take with this bike at this circuit. I hope we can find something that helps for the next days and be ready for the race. It’s a track I like, so I would love to have a decent feeling." 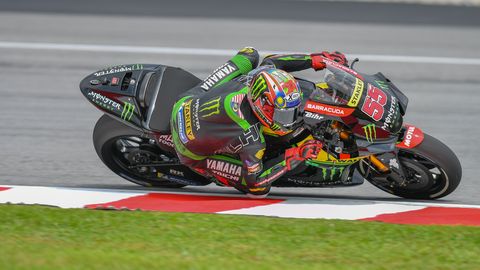 "Today has not been easy. This morning I felt comfortable and we weren’t too far. In the afternoon, we changed the suspension on the bike to improve, but it doesn’t seem to be the right way. I feel a bit confused, because we have a rhythm, we have ok grip, but the bike doesn’t want to turn, so it’s really difficult. This afternoon we will analyse everything in order to make an improvement for tomorrow. We believe we can do it, but we need to find a good way."