After Hafizh Syahrin was able to secure his best ever starting spot on the MotoGP grid, the Malaysian rookie started the Michelin Australian Motorcycle Grand Prix in a decent way, but concluded the first lap just in 13th. On the second lap of the race, he was even faster than the front and thereby, made up one position after another. In the sixth lap he reached 8th and was set to bring home what could have been his best premier class result yet, but unfortunately crashed out after 19 of 27 laps of the race.

On the other side of the Monster Yamaha Tech3 garage, Johann Zarco came off the line well, following his second consecutive front row start, but got stuck in traffic during the first lap, which saw him returning in ninth position. The fast Frenchman fought hard within the leading group and made up ground step by step. While trying to pass Marc Marquez, he went too hot into the first corner, which unluckily brought his race to an early conclusion. 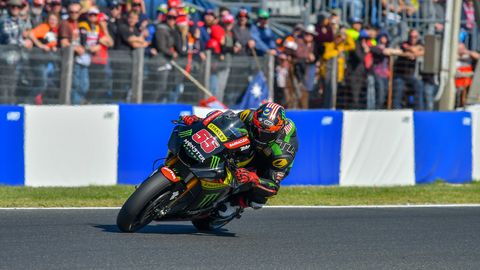 "Until lap 19 I had a good race. I just lost the front because I tried to close again on Miller. In the straight it is just impossible, as the Ducati just passes very easily. The guys and myself, we are already working very hard with our package, which is a bit different to the rest of the Yamahas. I was fighting with the faster group in the front, but it was just technically impossible to keep up with them, although I was pushing very hard. It’s a great pity to crash on the 19th lap. Anyway, we keep pushing, working hard and believing in ourselves because my team and me work very hard to be strong in the race. We tried to use our speed for a good result, but in the end we didn’t have a chance to fight with the rest of the riders in front." 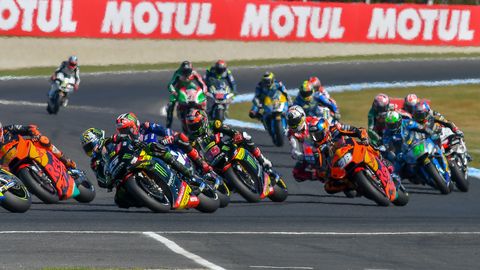 "It was a bit cold today, but the sunshine made it a nice day. Starting from third position was a good advantage. I got a good start, but in the second corner I slide with the rear and a few guys had the same, I lost a few positions, but then I was really feeling quite ok to attack and try to overtake. I’m happy about the feeling that I was strong and did some good passes. After a few laps, I was still feeling pretty good, I got the slipstream of Jack Miller and Marc Marquez was also there. We were going so fast and when we were braking for corner one, I touched the rear wheel of Marc and totally flew away. I had a big crash, but I’m okay, which is the most important thing, as that crash was really fast It’s a shame about the race, because finish the race would have been important for the independent riders’ championship, but I didn’t. The crash was big and I am sorry that Marc could not finish the race. Thank you to my team, because the bike was competitive today! I did a mistake and I need to make up for it on the next two rounds."

“There are some days you wish what you see is a dream – or rather a nightmare. But unfortunately, what we saw today was reality. We had high hopes with a great Qualifying from both of our riders, Johann on the front row and Hafizh with his best ever Qualifying in 10th. The start was difficult as usual, it was a big pack as we saw in the other two classes and clearly, Johann was trying to find his way through the field after a bit hectic lap one. We could see that he was really fast and I think he wanted to use the advantage of the soft-soft choice he had made for front and rear and that was quite intense until that incident, which was unbelievable. When you see a rider going down at such a high speed – I think he touched the ground at 280 km/h – for the few seconds following the incident, you just hope nothing bad will happen. Johann had a really good reflex and although his bottom is quite sore, he was strong to walk back to the garage and be still fully fit and ready to race the next round. That was a big thing. Unfortunate for the fans and the racing overall, Marc and Johann were out of the race, which made it less exciting. So, our focus went on Hafizh, who was behind the leading group until he slowly los the contact. But he was still holding on a good eighth position and we were quite happy because although he was loosing ground he was still keeping a good pace and he crashed without any warning, without really understanding why. That was the end of our weekend. Both of our riders could have been really strong and both of them get no points, which is a big disappointment. I know you always have to keep up the ‘never-give-up-attitude’, but today it is hard, also with Remy in the Moto2 class. The only good thing is, our riders are fit, ok and we have a race next week.”

The Monster Yamaha Tech3 duo did a great job in today’s Qualifying at the Phillip Island circuit. In very tricky conditions, Johann Zarco set the third quickest time of the strong field and will start tomorrow’s 17th round of the 2018 season at 16.00 local time (6.00 CET) from the front row of the grid.

Meanwhile, Hafizh Syahrin delivered an amazing performance as well. The Malaysian rookie competed in Q2 for the very first time today and did brave to conquer a stunning 10th position, which takes him to the front of the fourth row, after overcoming a crash in FP3 this morning. 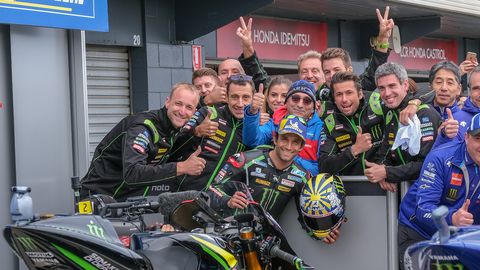 "I’m pretty happy about the first row. Qualifying today has been difficult with some drops of rain. Even we knew the track was dry, you are scared about it, so I was happy that the lap time was coming good until the last lap, when I was just too afraid to push even more. Anyway, after this Qualifying I’m so delighted to be third, because it’s an advantage for tomorrow and it also shows that I have the potential to fight with the guys in front. The pace for the race is not bad, so I will try to do it. I hope for nice weather on Sunday afternoon to give me even more confidence and enable me to fight close to the top. I think, we can have reasonable hopes to be back on the podium." 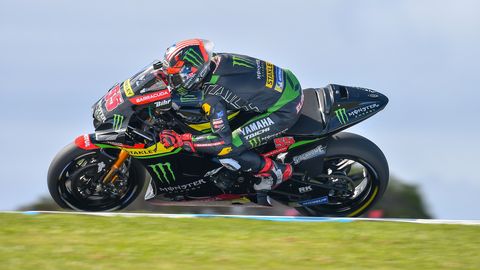 "This was a big day for me! I’m really happy, but at the same time I wasn’t too sure if I can make it to Qualifying and FP4, through I was very motivated and impatient to be on the bike. I try to get along with my pain in the fingers, the shoulder and the elbow. The result from FP4 was a huge surprise to me, because normally I’m quite cautious and slow coming back to track after a big crash. Maybe because I was really eager to prove myself, all this work payed off. Now I need to rest tonight because tomorrow we have a long race, so I try to recover as soon as possible, as my finger is quite in pain and I can’t bend it too much. Anyway, I’m really happy. Thank you very much to the team. We have a great feeling, although we had the big off this morning, but they keep me really motivated and I’m learning."

Zarco and Syahrin perform strong on day one in Australia

Monster Yamaha Tech3 rider Johann Zarco displayed an impressive pace from the word go today at the Phillip Island circuit. Following the eighth fastest time in FP1, he improved by impressive 0.972 seconds in the second session of the weekend in order to finish Friday just 0.555 seconds off the top of the overall classification.

Meanwhile, Hafizh Syahrin quickly discovered a new passion at Australian venue and was up to speed equally fast this morning. The Malaysian rookie lowered his lap time by 0.777 seconds in the second Free Practice to miss out on a provisional direct Q2 entry by just 0.046 seconds in finishing 11th of the highly competitive MotoGP field. 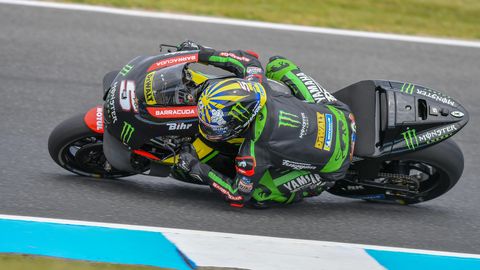 "This has been a decent first day. We got acceptable conditions. The track here in Phillip Island is just amazing and I’m happy that I was quickly on the pace. Then, it’s difficult to improve every lap and find a good setting on the bike to feel very comfortable. There are some riders, who are very fast. I feel I can’t find the same speed as them, but we try to work on the bike to make this step, because you need confidence. The bike gives me this confidence, but we are still missing in acceleration and on this track this is very important. At the moment, I’m happy. I hope to improve tomorrow on the dry to be competitive for the race." 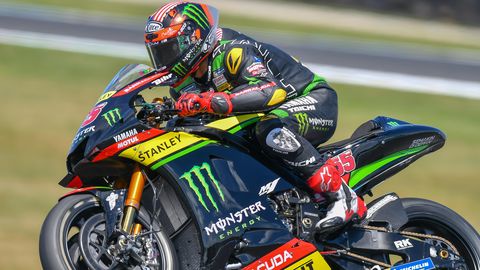 "I felt really good! To be honest, I didn’t expect I could be so fast from the beginning in Phillip Island, because this track didn’t belong to my favourites in the past. With the GP bike it’s different and I felt confident with this machine on this track. I’m very close to Q2 and I have to admit that I’m a bit disappointed about myself because it looks like I have something extra to use the speed a little bit more. But overall, it’s ok. We keep this in the pocket and I hope we have nice weather again tomorrow, so we can try to fight again. The bike works very well for the moment, but tomorrow we definitely have to work on my race pace and I wish all this goes well."