With an incredible strong performance Monster Yamaha Tech3 star Johann Zarco fought back to the top 5 in today’s scorching first ever Thailand Grand Prix. Starting from the third row of the grid, the fast Frenchman was quickly inside the fight for the top. Although he got passed later during the race, he fought back very strong to catch the fifth position on the final lap and eventually finish as the best independent rider.

Likewise Hafizh Syahrin showed an amazing performance at the hot Chang International Circuit. Launching his 15th MotoGP race from P18, he found an impressive rhythm after the first laps and passed one opponent after another. The Malaysian newcomer to the premier class kept his fast lap times until the finish line to earn the laurels for the best rookie, plus four important points in the championship. 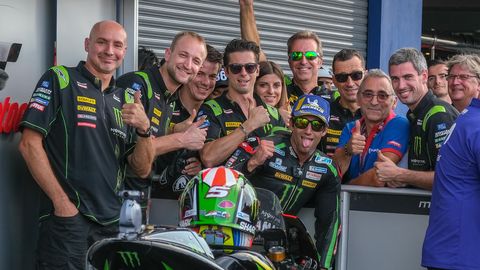 "It’s a track I like. The test has already been good in February. During the race weekend I was struggling, as I found it difficult to have a good pace, but in the race finally I was not that bad as I was thinking. I could enjoy it and was able to stick with the front, but still there was a gap in acceleration, so you need to compensate this, but when you try to catch them on the brake, you easily do a mistake and it was pretty difficult. I had to fight with Viñales in the beginning, but did a mistake and then I had to fight to catch back up. The pace was good. Then I saw Rins, I could push even more and overtook Crutchlow, plus Pedrosa crashed, so it was a tough race. It was difficult for me, but I think it was also difficult for them and at the end, I was fighting with Rins, who was in front of me. I was feeling good enough to catch him, but I knew that I had to stay focussed to don’t do any mistake. Finally, he went a little bit wide and I could go inside in corner nine to safe the fifth position. I’m pretty happy, because I’m not far from the winner and first independent is very good for the championship overall." 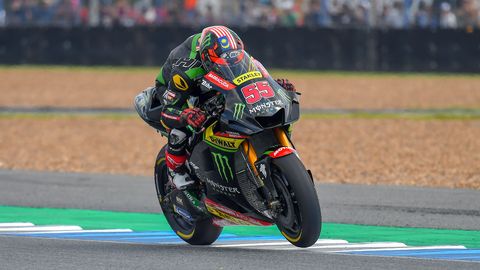 "I’m really happy to be back in the points. In the beginning of the weekend, FP1 until Qualifying, I was always in P18, so I felt a bit disappointed to myself, but I never gave up. I was really working hard with the team and they believed in me, which is what I needed. In the beginning of the race, my bike was overheating. The oil temperature was too hot and I didn’t feel the power of the bike. I tried to understand and try to think what I can do, so I decided not to use any slipstream because the bike was so hot. So, I first passed Nakagami and thought I can catch up with Morbidelli, I passed him and then I tried to keep the rhythm. I was really consistent. But still, I need to work hard in the next rounds and try to get closer to Morbidelli again. Now we made two points on him, but it’s still five to go, so we have to try to be in front of him for the rest of the season. Now we start to believe in our capacity, the bike worked well, I chose the right tyre and overall, we were working very well. I’m truly happy."

“What a race here in Buriram for the Thai Grand Prix! After what we saw in Moto3, Moto2 and MotoGP, I really wouldn’t understand if the Thai crowd doesn’t love this sport. I think it was an incredible day, an incredible and mad crowd, which is an unbelievable feeling. For Monster Yamaha Tech3, we didn’t really know what to expect here. There was a lot of concern about the track conditions, the heat on the track and the tyre was a bit of a worry for everyone. Johann bravely decided to take a medium front, which was the softer option compared to most of his opponents and at the end of the race that paid off. The lap time never dropped. He had a great start, was right in front with the group, unfortunately he had a little bit of a moment touching Maverick (Viñales) in turn one, where he lost a full second on the leading group and then slowly by slowly, him, Dani (Pedrosa) and Alex (Rins) caught back on the front, but Johann was behind. Then Dani made a mistake and you could see that he was clearly closing. Cal (Crutchlow) was slowing down and finally we didn’t know if we could have the possibility to pass Alex in the last sector of the last lap, but he made it. A top 5 is an unbelievable result, very close to the leaders and Yamaha was in three, four and five, so we were right behind the factory guys, plus the best independent rider, which is quite a lot time it didn’t happen and the independent championship between Johann, Cal and Danilo (Petrucci) is very close. It’s really exciting and I’m very happy for Johann and the whole team as well, because recently we went through some tough times and we know that a positive result brings a lot of positive spirit and a lot of the result is in the rider’s mind. So, Johann is leaving Thailand for a week off before Japan with a positive frame of mind, which is very important. On the other side of the garage, Hafizh had a bad start, but showed an unbelievable recovery. He was lapping really fast, I was impressed. He decided to go hard – hard like the big boys and made it work. He passed all of his main opponents and just to die on the rear wheel of Andrea Iannone. His race was honestly one of the best the whole year. It was a bit of struggle in Misano and Aragon and we didn’t know what to expect, but he showed us that we shouldn’t worry about the future. He’s learning a lot, his physical condition was great and without a small technical issue on his equipment I think there was a small possibility to end up ahead of Iannone. At the end of the day we are happy, our two guys made a great race and also very big congratulations to Hafizh and the entire Monster Yamaha Tech3 crew. Now we have one week before Japan, but if the show is the same there, it’s going to be another exciting week. Meanwhile, we are packing as happy guys.”