Zarco and Syahrin squeeze out the last tenths in Aragón Qualifying

Monster Yamaha Tech3’s Johann Zarco delivered a strong performance during Qualifying for the Aragón Grand Prix this weekend. The French star got the best out of himself and his Yamaha YZR-M1 today and missed out on Q2 by just 0.106 seconds, following a huge improvement after a tough opening day at the Spanish circuit. He will attack the 14th round of the season from the fifth row of the grid.

Hafizh Syahrin showed an equally resolute uphill Saturday. The MotoGP rookie from Malaysia lowered his FP1 time from Friday by incredible 1.719 seconds and finished Qualifying one in ninth position. Therefore, the Monster Yamaha Tech3 rider has to tackle the Aragón round at 14.00 local time tomorrow from the seventh row, after he concluded Saturday directly behind Yamaha colleague Valentino Rossi. 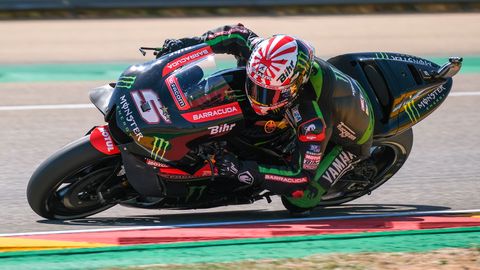 "It’s not easy to say if I’m happy or unhappy. Obviously, the position is not what we want, but we couldn’t do better. We are improving ourselves, I tried to get better every time, however we feel that we could not do more. Since Misano we have a quite difficult time and I could almost be in Q2, but I missed it for just a tenth of a second. Let’s wait and see tomorrow. We start from far, although I still hope we can fight from the beginning and make up positions and then we will see if the others might struggle with the grip. Maybe I have a chance to do a top 10."

"I felt really good with the work that we’ve done with the team, because yesterday we were struggling a lot to find a bike to turn, when we used a lot of banking. This morning, I was improving step by step and in FP4 I was doing very well. In the first run of the Qualifying I felt really good with the bike after we changed something, but in the second run I was thinking too much to find a good reference and, in the end, I made a mistake with less than five minutes to finish. I had the feeling we could improve, so I’m very sorry for my guys. We try to have a good race pace tomorrow morning in the Warm Up in order to have a decent race."