Due to persistent rain from this morning, the track conditions at the resurfaced Silverstone circuit didn’t allow the riders to do a safe race today, therefore the 12th round of the 2018 MotoGP World Championship season had to be called off. 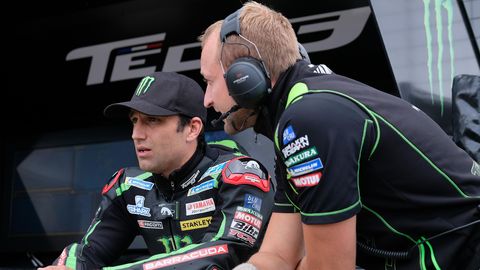 "The race was canceled after we were waiting a long time today hoping that the rain stops and we have less water on the track. We usually can race when it’s raining and although it was raining all day today, the rain was not very heavy. But with the new asphalt apparently, they did a mistake and it was so slippery with the bumps and there was aquaplaning. The crash on Saturday has been very strange and we could feel that almost every rider was already on the limit on the sighting lap. We took the decision we can not race because there was still too much water. It’s a pity we can’t go out there because we all were ready. But in the end, it’s safer to take this decision." 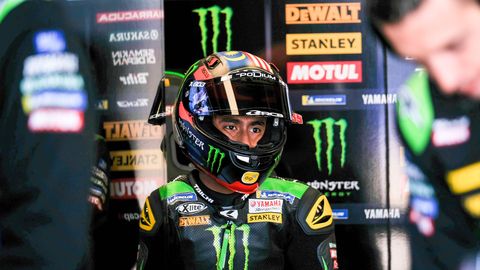 "The safety commission decided to cancel the race because there’s just too much water on the track. I can’t say much. We wanted to race, but there’s nothing we can do. It’s a pity with the new asphalt, so I hope they solve this kind of situation. I really wanted to go out and learn on the GP bike in these kind of conditions, but it’s decided and we need to accept. See you next year, Silverstone! Now we just look forward to the next race, trying to improve and learn."

“I’ve always been a democrat and I respect the majority, I respect above everything the riders because they are the ones who take the risk and they can decide above anybody if it’s safe to ride or not. Personally, straight after the grid formation and when we decided – which was the right decision from race direction – to postpone the start of the race, all the team managers had a meeting and there was a possibility as tomorrow there is a bank holiday in the UK and tomorrow the sun will be shining, the track will be dry, so everything was ready for a great MotoGP race, which most of the time we have here at Silverstone. But some team managers decided that they didn’t want to do it, although we already did it in Qatar and it was not the end of the world to organize a few more rooms or change a few flight tickets. I have always been frank and said what I think and I think we should always try to race. There was a possibility to do it in a safe way and I’m disappointed we didn’t take it. But anyway, let’s forget about that, come out of here. We just can say that we feel very, very sorry for the spectators that have been around and waiting this race for a year and I think this should be more in our mind. We go back to the sunshine in the South of France and hopefully we’ll have great race in Misano.”

Monster Yamaha Tech3 star Johann Zarco delivered a breathtaking Qualifying at the British Grand Prix and bravely ended up in the front row again. The fast Frenchman timed his fastest lap to perfection and secured himself the third spot for tomorrow’s 12th round of the 2018 MotoGP World Championship season as the best Yamaha rider, although the conditions where far from ideal with mixed weather.

On the other side of the Monster Yamaha Tech3 garage, Hafizh Syahrin faced some tricky track time in a rain affected Q1 as well. The Malaysian MotoGP class rookie concluded the important three Free Practice sessions in P19 overall and was progressing to 12th in FP4. Later on, he was fighting trough the difficult timed session this afternoon, which he finished in 23rd, highly motivated to make up as many positions as possible during the 20 laps race at 13.00 local time tomorrow. 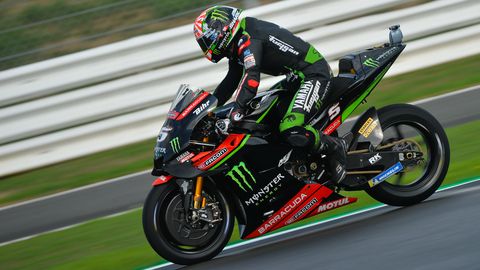 "It was not easy because of the conditions. We had a rain tyre with almost dry conditions, but that’s what I love on the bike. I could really make a difference. The others started the session quite fast, so I had to push a lot to gain a good lap time. Then I cooled down the tyre, did a good lap time again and I was first. For the second last lap I slowed down again and Marc (Marquez) was there waiting with some others. I knew I had the advantage, so I didn’t want to help them to go faster. I waited and pushed on the last lap, which was really at the limit with the chequered flag. Finally, it was a good lap, I could improve and make it to the front row. But I was fighting with Marc and I think we lost a little bit of time there. I enjoy this first row. We don’t know the conditions tomorrow yet, but I want to use this opportunity to stay with the front until the end." 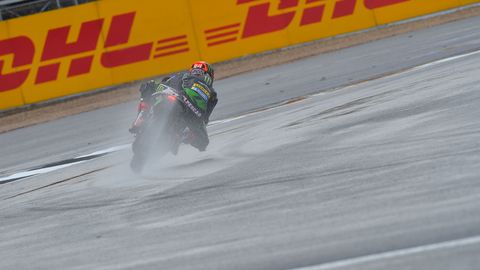 "We had very tricky conditions during this Qualifying because when the track was full wet, we couldn’t go out due to safety reasons. On the wet places, I felt really good, but where it was already dry, I had some movements on the bike, which were not easy to control. For me it was definitely difficult, especially because it was the first time having half-half conditions. But even if I have to start from the back now, I know that I need to get off the line well tomorrow and try to be ready after the Warm Up. The forecast says rain for Sunday, so I hope I can find a good feeling in the morning and then we’ll see what we can do in the race."

Johann Zarco and Hafizh Syahrin started their work for the British Grand Prix today with two busy sessions at one of the longest tracks in the MotoGP calendar. With an impressive effort during the last minutes of the second session today, French star Zarco made it to the provisional Q2 rankings, after he improved on his fastest FP1 lap by 1.281 seconds in order to conclude Friday in seventh position.

In the meantime, Syahrin did a huge step in the course of his first day aboard the Yamaha YZR-M1 at the British circuit. The Malaysian rookie lowered his lap time by incredible 2.155 seconds from this morning to the afternoon, while increasing his feeling at the windy and demanding venue. Syahrin now eagerly awaits FP3 tomorrow morning at 9.55 local time to make another step into the right direction.

"We were lucky to have dry conditions today, so I’m happy because we were able to do some really good work in the course of the day. In the afternoon we improved a lot and on my last three laps I really got a great feeling and I’m satisfied that the bike was answering well. We ended up in seventh position, which is going to be useful in case of rain tomorrow to be straight in Q2. The track itself is difficult, the wind and the bumps make the M1 moving a lot, but this pushes us to work even more on the bike. I think we can find further solutions for this, which will also help us a lot for the next races." 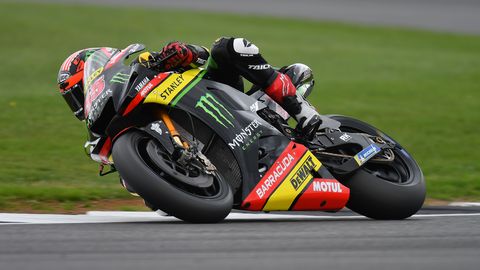 "I felt very good today, but we still need to find a better feeling with the front. I know that Barcelona is already far from this weekend but I’m looking for the sensations I had there in order to stop the bike better. We are working really hard and improve step by step. Here we find quite many bumps, so it’s even harder to turn the bike when the front is jumping. We need to try to solve this situation. This track is not easy with the GP machine, I need to understand everything a bit better and then we see how it will work out tomorrow."