The Monster Yamaha Tech3 duo performed bravely today in Spielberg for the eleventh round of the 2018 MotoGP World Championship to conquer a ninth and a 16th position. Knowing that the Austrian circuit would be a tough challenge for him and his Yamaha YZR-M1, Johann Zarco did his best to convert his second row start into a decent race result, giving his all to eventually reaching ninth in a hot and intense 28 laps clash.

Following the first lap, Hafizh Syahrin was battling hard to come back from 21st. The Malaysian rookie made up one position after another and was able to keep his strong pace from the first to the last lap, where he had a tough run to the finish line, eventually ending up in 16th place, where he missed out on the points scoring positions by just 0.271 seconds. Before the entire championship settles over to Silverstone for the British Grand Prix in 12 days’ time, Syahrin defends his lead in the incredibly close Rookie of the Year classification. 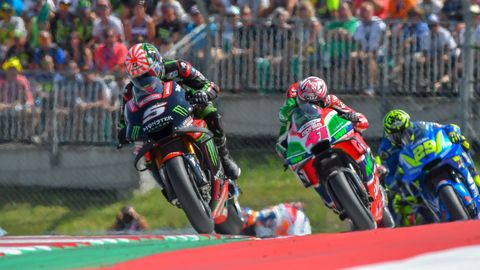 "It has been a difficult race today. I expected to have a better pace, to be honest. I chose the soft tyre because it was the one I had the best feeling with, but it wasn’t easy. In the first corner I lost too many positions and then I was not able to catch back up, so I was struggling. I tried to do the best, but I was too slow. Even when Valentino overtook me, I thought I could find a better pace, but it was not possible. So I had to finish the race and in the end it was kind of funny. It was maybe my best moment in the race when Bautista passed me and we were catching up on Tito. On the last lap we had a great fight, overtook each other a few times. In the last corner I took advantage and finally was able to finish ninth. It’s not a great result, but not the end of the world, even on a track I like." 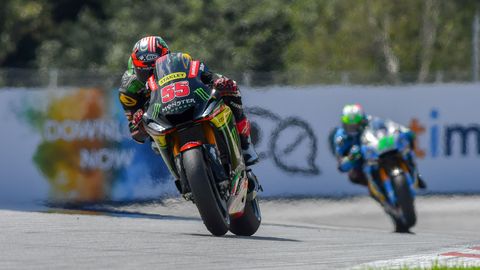 "The race was really good regarding my rhythm, but I was a bit disappointed about myself because I didn’t do a good Qualifying. This track is not easy for the Yamaha machine and we missed some sessions because of the weather, so we didn’t do many kilometers on this track. As I’m here for the first time with the GP bike, I realized that the circuit looks easy on the paper, but in some corners we need some traction to have a good drive. In the race the bike was really good for me, I could do the pace like the top 10 in every lap, it’s just a shame that I was so far back. On the first lap I needed to start to pass many riders that were slower than me. The last lap was truly good, I thought I could pass Nakagami, but in the end it didn’t work out. Next race, I try to improve my Qualifying, which is very important now as we know that we can be really strong in the race. I need to work very hard and I’m looking forward to the next GP."

“We knew this weekend wouldn’t be easy and in the end, it wasn’t. Johann did the best he can and I would like to thank him one more time for his never-give-up-attitude. The Qualifying was the highlight of the weekend for sixth position, first Yamaha, second row and it was quite a long time we weren’t on the second row. So, we were quite positive and hopeful of an ok result. He started average and was in a group where there were a lot of touches and they were messing with each other, so they lost contact with the leading group. Once he got his head down and found his rhythm he has been fighting all race long. In the end I think, he is not where he wants to be and not where we want him to be. We do the best we can with our package and we know it will not change and be the same until Valencia. We just try to continue the way we are doing, trying to keep positive and not have a negative attitude. I think in this tough moment is where you learn a lot. It’s not easy and it’s always so much easier to fight for top positions, but I think this will help him for his future career and clearly next year. That’s the main lesson – continue to get the best out of our package, keeping a positive attitude, believing in each other; him in the team and the team in him and maybe some circuits will be easier for us. We knew that Honda and Ducati were almost impossible to beat here, so we just need to carry on pushing. Hafizh did a really good race, not like in Czech Republic and not on the media and TV radar one more time. He had a slow start, but recovered really well, got some guys like Miller behind him, finished ahead of Franco Morbidelli and right behind Takaaki Nakagami. I think with one more lap he would have maybe been able to get one more position because he was a lot quicker than the two of them. 16th is not the best result, but he learned a lot today and I think this is what we are expecting from him. I’m proud of Hafizh and on what he did today because the whole race was truly competitive, fast from the start to the end and he did a good job. These two races back to back were a bit tough, now we have a few days off and then it’s time to go to Silverstone.”