Monster Yamaha Tech3’s Johann Zarco launched forward from the third row of the grid today in scorching Automotodrom Brno. He came off the line well, defended his starting position and kept up with the top during the initial laps. With a strong and consistent pace, the fast Frenchman fought through the 21 long laps and saw the chequered flag in seventh. After 10 of 19 rounds in 2018, Zarco now occupies sixth of the overall ranking, still well in striking distance to the top 3.

In the meantime, Hafizh Syahrin did a good start and made up some places already on the first lap. The Malaysian was giving his all while fighting with his fellow rookie Franco Morbidelli, but eventually had to play it safe and take home important two points while crossing the line in 14th in order to keep the advantage of the Rookie of the Year on his side. 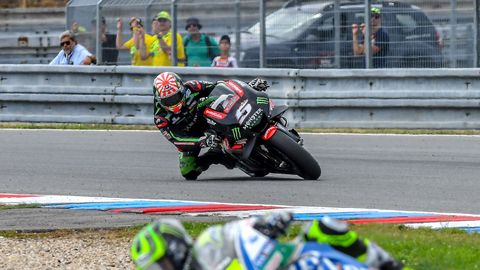 "The race was good – P7 like the Qualifying. I tried to overtake at the beginning of the race, but it was complicated as the others were quite strong and I was not able to do exactly the same riding like them. So, to stay with them, I was sliding a lot and then I had to slow down a little bit. In the second part of the race I found a better pace to follow this group and almost caught them to fight, but I was a bit too close to the limit. At the end of the race, the bike was still under control, but I think I didn’t have enough positive points to overtake Danilo (Petrucci). I just had to finish the race and be happy with that. From yesterday, my feeling on the bike is getting back better and better and I could see in the race that I was very close to the podium since a long time. Something was missing, but now I’m sure I can find it with my team, because we have many races in a row now and not a lot of rest, which will be an advantage to step forward." 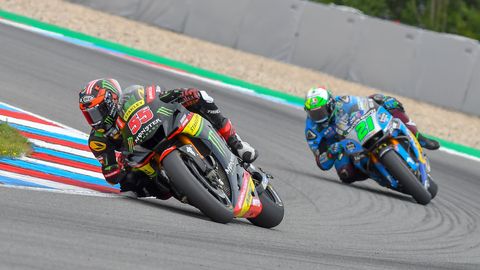 "In the beginning I felt really good with the bike and I was very close to Bautista. But after the middle of the race, the bike got nervous on the exit of the corners, I don’t know why. I tried to understand, but it was difficult for me to fight like this, although I tried to control the bike and work with my body. For sure it was very tiring. Now I try to come back stronger from the test tomorrow. We try to find a solution and I aim to continue working in this way. I collected two points more and it’s still very close to Morbidelli, but I try to make a good race next week."

“What a race! I think today the spectators who took a few days off to come down to Czech Republic didn’t regret their trip because Moto3, Moto2 and MotoGP have been fantastic fights. When the MotoGP race is like this, it’s just an unmatchable sport and show. I think the whole grid was really worried at the start because we were thinking it might be a replay of 2017 as we could hear and see that there were some thunderstorms and there was a high possibility of rain. We were more ready than last year, but anyway fortunately, we didn’t have to go through a flag-to-flag race and the track stayed dry and warm. Johann was one of the few riders on soft rear tyres. Although he said that he’s confident, I was a bit skeptical, but the first half of the race was good, he was there right at the end of the front group. Then we had two or three laps where he was losing a bit and I thought the gamble wouldn’t pay off. But then him and Bautista, the only ones on soft where the fastest for three laps in a row. So, we were more confident that it was a good choice. I was hoping he could catch the guy in front of him, but he never really managed to be that close. Overall, he had a really strong and good race. Three laps to go he was just 3.5 seconds off the front and in the last three laps he just took it home. Seventh is not too exciting, but all the top guys were there, he was in the group. I would say, it was the best race, we could have hoped for. The two factories that are on the podium are really strong at the moment. Clearly, they work very hard, but without an improvement you can not move forward. I think Johann did the best he can together with the team, he did the tyre gamble in order to have something, but on a regular base on a circuit like here where the machinery is very important, honestly there is not a lot we can do. We are a bit down to our competitors and it’s a bit frustrating, but this is the situation. We’ve been living this for many years and we continue to try our best. Johann is a fighter and we want to give him what he deserves to be in front. On Hafizh’ side there was a big battle as well, but of course less under the radar. He was fighting with his fellow rookie Franco Morbidelli. He was in front for quite a while and then Franco passed him, Hafizh followed, but there was nothing he could do to repass him. He is still leading the rookie championship, but he lost a point to Franco. This is exciting! He is learning and I think he did a really good weekend here in Czech Republic. In just a few days we’ll see what we can do in Austria.”