Monster Yamaha Tech3 star Johann Zarco displayed a resolute race performance today for the eighth round of the MotoGP Championship season at the Sachsenring. Following a tough Qualifying the Frenchman had to start from 14th on the grid, but already made up two positions in the opening lap. With a hard fight Zarco eventually ended up in ninth to collect seven important points and goes into the summer break as the leading rider of the independent riders championship.

On the other side of the Monster Yamaha Tech3 garage, Hafizh Syahrin showed a fantastic effort. Starting from the back of the fifth row, the Malaysian premier class newcomer caught one rider after another, bet all his fellow rookies to finish in eleventh and reclaim the provisional top spot of the Rookie of the Year standing. Now the entire paddock commences a short summer break before the second half of the 2018 season kicks off in 19 days’ time at the Brno circuit in Czech Republic. 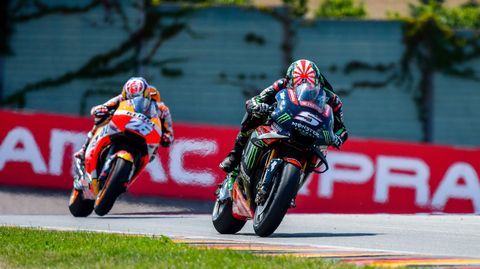 "I’m happy about the race. Ninth position is good for the difficult weekend I had. Although I’m happy about the result, I’m a bit disappointed that I couldn’t see the podium as my pace is just not good enough to be there. Together with my crew we work hard, but we didn’t find the right solution this weekend to be stronger. That’s the hardest task, that I hope we can solve after the summer break in order to have a better feeling and be fast again. Maybe we can find the way to set the bike up better. I cross my fingers for the second half of the season to find the pace for the podium again. Fifth in the championship, same like fourth, but it would be really fantastic to fight for the top 3 in the overall standings and I trust in it." 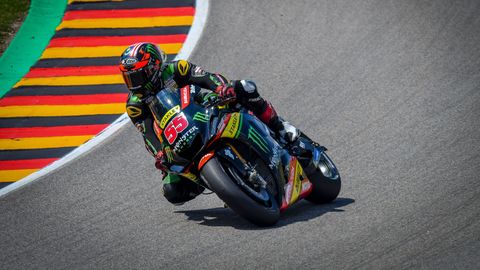 "First of all, I want to say thank you very much to my crew, because they made a really good job on my setting. We came back in FP4 after we went a bit in the wrong direction in FP3. I felt like in the beginning of the season and honestly, I think this track is really tricky, but I scored very strong points. I could stay with the group of Johann, but then suddenly the rear tyre had a big drop. I tried to understand and manage as good as possible, this is part of my learning experience. Eleventh was the best I could get at the moment. I tried to come back stronger after some difficult rounds and now we are best rookie again before the summer break. I try to keep my physical condition consistent, try to train hard in the break and don’t lose the focus, because I want the Rookie of the Year title."

“We were not expecting to have an easy life in Germany, but honestly speaking, Friday and Saturday were very difficult, including the Qualifying. Warm Up was also quite tricky, so we started the race with not too high hopes.  But again, I would like to say that both, Johann and Hafizh showed that they are racers when it comes down to race day and they showed that they try to overcome all the issues they are facing in practice and I think we finished the race in almost the best position we could have hoped for. Johann had a great fight with Dani Pedrosa and just gave up in the very last laps. Still he managed to end up in ninth position which makes equal on points with Andrea Dovizioso in fourth overall – a great achievement. We still have ten races to go, so everything is possible. On the other side, Hafizh showed a big fighting spirit and was clever. He was in ninth position in Barcelona a few laps to the end before he did a beginner mistake, so today he showed us that he has learned from that. He has been fighting with great names and the last guy he has been fighting with and whom he eventually beat on the line was Andrea Iannone, which is a full factory rider and a GP winner, so this is something that makes us proud. He is also taking back the lead in the rookies classification, which is our and his main target this year. We are happy with our two guys. Like everybody in the paddock they need a few days off. Johann will have certainly a few days of rest in the South of France, while Hafizh is flying back to Kuala Lumpur to meet the family. Have a good holiday to both of you, recover, recharge your batteries and of course this also applies to the whole crew. Thank you for your hard work and keep some straight because we have another ten to go. Bonne vacances!”

The Monster Yamaha Tech3 racing duo has to launch the German GP tomorrow at 14.00 local time from the fifth and the sixth row respectively. Johann Zarco lowered his practice time from Friday morning by 1.431 seconds during Qualifying today but was unfortunately missing out on Q2 by just 0.116 seconds as the premier class features an incredible close field on the shortest track of the calendar.

On the other side of the Monster Yamaha Tech3 garage, Hafizh Syahrin faces the hard task to learn the unique circuit aboard the Yamaha YZR-M1 in the course of this weekend. The Malaysian rookie did well in improving by more than 1.5 seconds from Friday morning to Saturday afternoon and eventually, has to attack from the sixth row of the starting grid tomorrow. 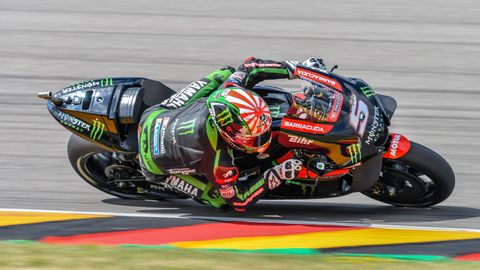 "Today has been a tricky day. I don’t really understand what is going wrong. It’s very difficult to go fast and improve myself during the weekend. So, tomorrow in the race I will fight and see where I can finish, but it’s a truly complicate moment that I hope we can overcome soon." 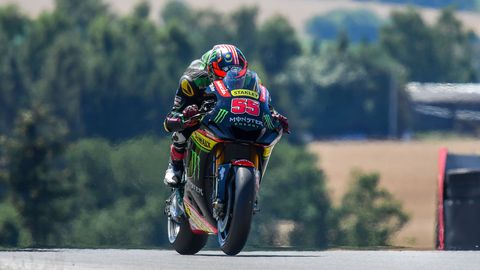 "In the afternoon I felt better than this morning, as in FP3 I tried to find a good setup and was struggling a bit. Anyway, for the two sessions after lunch time, the team found the best bike for me, which I used in FP4 and with which I also tried to make a long-run to be well prepared for the race. In the last exit of the Qualifying I was a bit nervous, but I believed that I could go 0.2 or 0.3 seconds faster and therefore, we would have been able to fight for the top 15. Yet, we were very close. I try to make a good start tomorrow and to do a strong race in order to score some points for the team. I hope I can fight with my fellow rookie Nakagami, who seems to be very strong here."

Busy opening day for Syahrin and Zarco in Germany

The Monster Yamaha Tech3 pair started their German Grand Prix campaigns today in good conditions. While MotoGP rookie Hafizh Syahrin had to learn the demanding Sachsenring circuit aboard the big machine, he improved steadily in the course of the day to eventually conclude Friday just 0.892 seconds behind the top of the ultra-competitive premier class field. Meanwhile, Johann Zarco began the weekend with a top 10 result in FP1 this morning and lowered his lap time by seven tenths during the second session today working towards the race on Sunday. Yet, the fast Frenchman needs to find some more time at the unique venue and bounce back in the standings tomorrow, starting with FP3 at 9.55 local time. 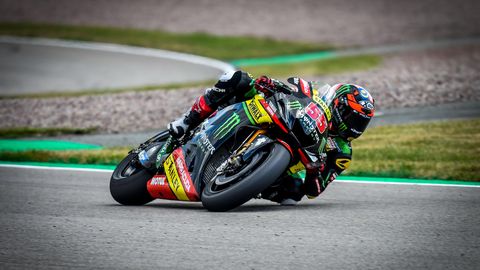 "The first day here I felt really good. I’m here for the first time with the GP bike and especially in turn 11 we have to be really carefully as it’s the first right corner after many left ones. I wanted to try to understand everything on the first run. On my second run, I felt really good with the medium tyre. Afterwards I changed to soft, but I felt that I’m losing the front, especially when braking hard. We are very close, just 0.8 seconds. I try to give my best for tomorrow. I’m really happy with the first day and hope that we can improve a bit more on Saturday." 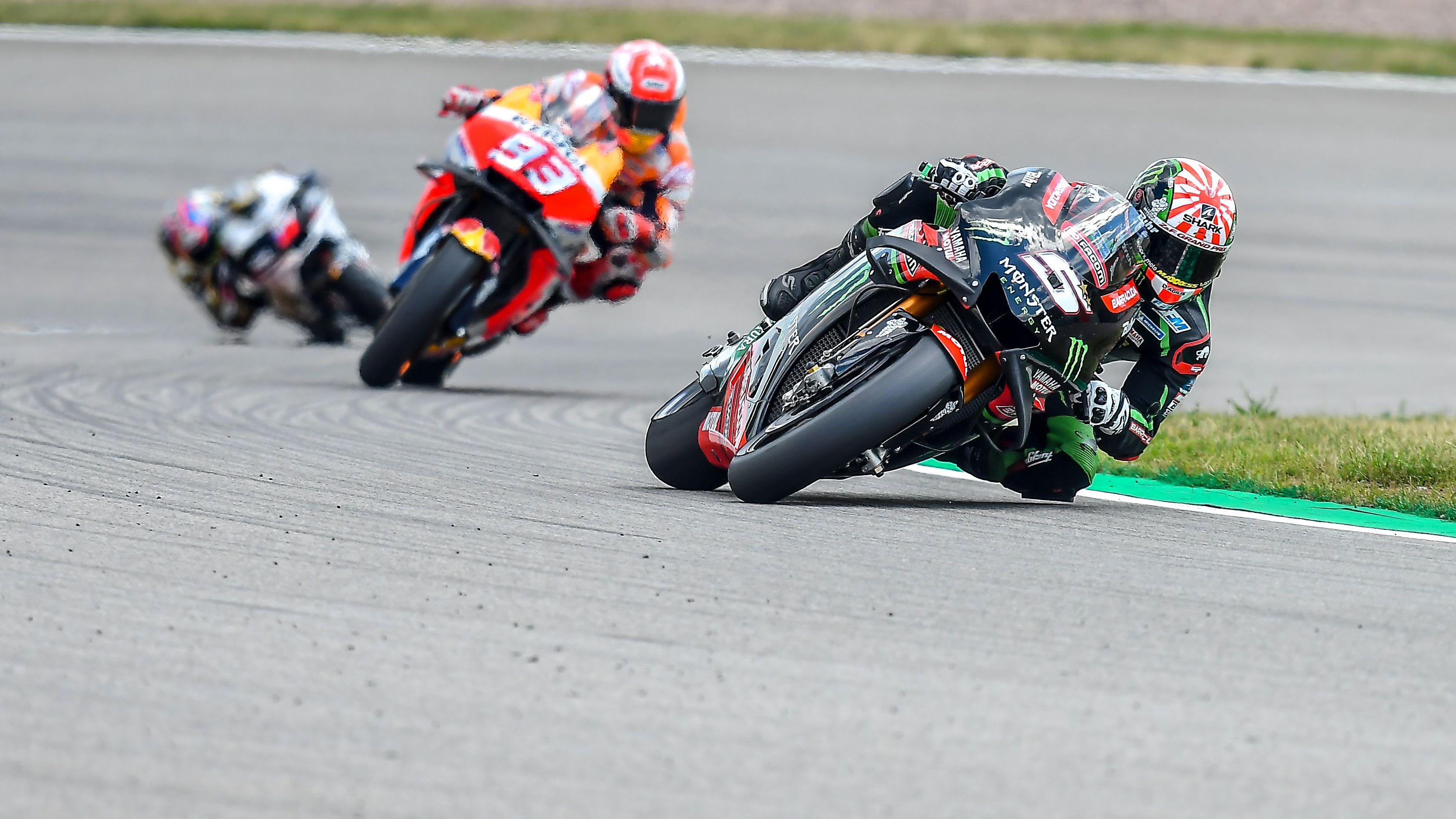 "The first day at Sachsenring started well and also finished quite well. We are working hard, because we do so many laps during the race and therefore, it’s truly important to feel comfortable. It’s a complicate track and I want to feel good on it. This morning the lap time was coming while riding easy, which made me happy. In the afternoon, we could improve and we didn’t put the new tyre in at the end, because we wanted to keep working for the race, so it’s necessary in FP3 tomorrow to push hard in order to go directly to Q2. What we did today, I think, brought us on a good way to have a successful race."