The Monster Yamaha Tech3 duo lands in Italy impatiently this weekend for the sixth round of the 2018 MotoGP World Championship.

Following his fabulous pole position in front of his home crowd, an unlucky end during the French Grand Prix and a very fruitful test at the Circuit de Barcelona-Catalunya, Johann Zarco is ready to fight back aboard his Yamaha YZR-M1, although the 27-year-old is aware of the fact that the 1.141 kilometer straight of the Autodromo del Mugello won’t play into his hands. Yet, Zarco is eager to convince with his incredible determination and his extraordinary way of hard work.

Meanwhile, MotoGP rookie Hafizh Syahrin, who experimented with his machine at the one-day Michelin test in Barcelona in order to get an even better feeling, is eager to get out the best of his regained fitness and his M1. In doing so, the Malaysian aims to reclaim the top rookie spot, kicking off his intense program in the first session of the weekend at 9.55 local time on Friday. 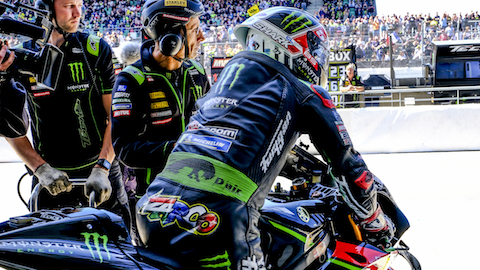 "Mugello is a fast and very nice track. Last year I was struggling there, but this season I control the bike much better and overall, after that bad Sunday in Le Mans I want to get back to good results and many points in the championship, which is very important. I think I learned a lot in Le Mans, even with the crash, so I arrive in Italy with high motivation and happiness because also the test we did in Barcelona was pretty good and I think we have great opportunities to manage the bike in order to fight with the top guys for the podium."

"As usual, I look very much forward to the next round. For sure, my rookie competitors like Morbidelli are highly motivated to do well in Italy, but so am I. We had a productive test in Montmelo, I get along better and better with the bike and we also tried some small things, which gave me more confidence. I’ll give my best for the team and myself. The track in Mugello is very big, as I’m arriving there for the first time with the GP bike, I’ll try to understand this layout as quick as possible. We know, that the circuit is a very fast one, which requires a very good top speed, so we will try to have a good setup to be ready in FP1 and attempt to get closer to the top with each session. My physical condition is very good and I’m training truly hard in order to challenge all the premier class riders. We’ll see what happens, when we arrive."

“The French GP is over and I believe it’s good having this event behind us. Johann did the perfect weekend until Saturday night and I’d like to thank him again for what he did. Unfortunately, the pressure was too big on Sunday and he couldn’t finalize what we were all hoping for. It was a tough weekend, so it was quite good to have a very constructive test session with a new layout and new asphalt in Barcelona, plus some days off afterwards. I spent four days riding off road in Corsica and it was amazing. If the Grand Prix guys don’t know this place, they definitely need to have a look. Coming back to the serious things, Mugello is a tough track for us and was pretty difficult last year as we couldn’t have the weekend we wanted. We didn’t test there and we know, that there are a many Ducati bikes on the starting grid, which clearly will be fast there. Anyway, we’ll give our maximum as usual. It’s a beautiful circuit, the Italian fans are always unbelievably hot and if the weather is nice, it will be a great GP weekend. Regarding Monster Yamaha Tech3, Johann can work with less pressure and with the will to come back in the championship. For Hafizh, the test in Spain was very important, as he needs more laps than anybody else. He ended the French round as the best rookie, an effort that makes us really happy. I hope both, Johann and Hafizh can match their target this weekend. Tuscany is waiting for us and we won’t make them wait too long.”