Fruitful test for Zarco and Syahrin in Montmeló

The Monster Yamaha Tech3 duo concluded a productive day of testing today at the Circuit de Barcelona-Catalunya. Apart from trying the tyre allocation Michelin brought to Catalunya in order to meet the requirements of the new asphalted track, Johann Zarco was working on his basic setting for the race weekend in Montmeló, which will take place in three weeks’ time. Yet, the fast Frenchman was the best independent rider and set the second fastest time of the day, just 0.277 seconds behind the top.

On the other side of the Monster Yamaha Tech3 garage, Hafizh Syahrin did his first laps with the Yamaha YZR-M1 at the 4.627-kilometer layout. Like his teammate, the MotoGP rookie tested the new tyres, but was also experimenting with a new front fairing, whereby he delivered a fastest lap of 1’40.435 minutes to complete the one-day test in 16th position, missing out on the top 10 by only 0.274 seconds. 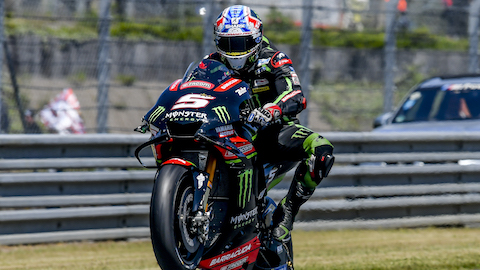 "I’m pretty happy to have these two last corners back, because for the motorcycles it feels a lot better. Plus, the new surface was really good. Today we put a lot of rubber on it, because many riders did many laps and you could feel that the track got better and better each time. Even with the hot temperature, the feeling was good. They worked well and we also did some great work with the team, trying to prepare ourselves for the Catalunya Grand Prix and at the same time we could collect some useful information to prepare Mugello. We mainly had to test tyres, to give information to Michelin in order to find out, which allocation we can use for the race here and for us, there was nothing too special on the bike, we just tried to find the best balance to enjoy riding." 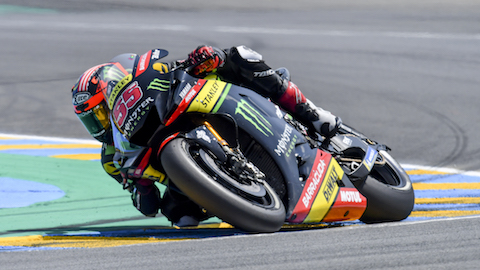 "Compared to last year, the new asphalt is a huge step and I’m really happy with it. I was here for the first time on the GP bike and I already have a lot of confidence. We tried some settings on the bike, I tried to improve on my riding again and we made a step forward, with regards to the next race as well. We have a good pace, especially to come back here in three weeks for the race and I feel ready for the next round, too. The day was truly good, apart from a small crash in the afternoon, which didn’t have any consequences. I was quite quick in gaining back my confidence after this and can’t wait for Mugello now."

Hafizh Syahrin showed up with a brave performance at the home round of the Monster Yamaha Tech3 Team today. Following a cautious start, the MotoGP newcomer gained ground in the course of the 27 laps, fighting his way through the experienced field impressively to see the chequered flag in 12th position and won the duel against fellow rookie Franco Morbidelli.

Local hero Johann Zarco kicked off the race in an extraordinary way, riding in the top group from the early stages and was determined to celebrate his first premier class win in front of his cheering home crowd. While battling for the lead, the Frenchman unfortunately slipped out on the eighth lap and therefore has to wait for the next round, which takes place in a fortnight in Mugello, Italy, in order to try to make his dream come true. 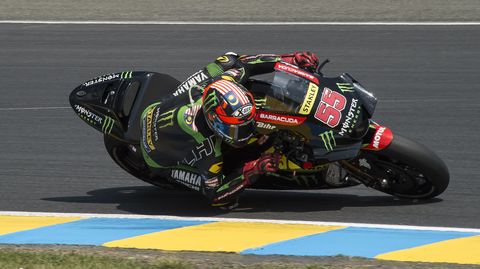 "In the race I was feeling very good, but it’s a shame that I did a bad start and then I was behind a slow group, I had to pass one by one. I know, that my pace was very strong and I think I could have been inside the top 10 with this, but it’s difficult to pass on this track and you also need to be really brave to pass in the first corner. I tried it many times, but in the end, I lost the faster group in front. This is a nice experience for me and I try to learn and to understand for the next races. Also, my confidence is coming back. In Mugello I hope I can give my best again, I try to stay focused and work hard on my physical condition and my riding." 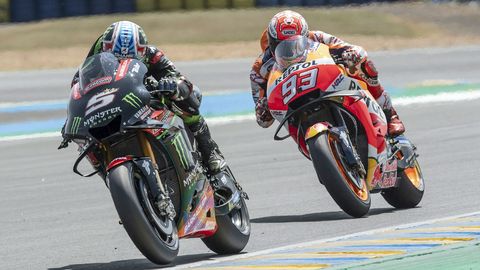 "We experienced a difficult end of our home Grand Prix, after having great feelings. Anyway, we take home very nice memories with the pole position and showed a great performance. We worked well and, in the race, I was in second position. My start was quite bad, but in the first chicane I could almost immediately make up the positions again. Afterwards, it was difficult with Lorenzo, maybe I could have been faster, but I just didn’t get through. Later on, I wanted to overtake him, but I did a little mistake. I think I was too fast in that corner, went a bit wider and the front closed. I didn’t expect to crash, because my feeling on the bike was good. I should have maybe wait to have less fuel in the bike, which was the best moment for us during the weekend. Even with used tyres, the control was good and it happened at the beginning of the race. I should have waited a bit longer, but I didn’t do it. Now I have to keep in mind, that sometimes you are lucky and sometimes you are not. Yet, I will keep doing what I do all over the world and keep the victory as a target this year."

“The French Grand Prix is over and I can’t tell you that this isn’t a scenario I didn’t think about. Until Saturday night, Johann did the perfect weekend in my opinion, he got this unbelievable pole position, kept his head cool and looked like coping really well with the pressure of the home GP. This morning, we saw another Johann. There was this kind of warning when he crashed together with Lüthi during the Warm Up, which is not what he is normally doing. We could see, that he was nervous, he wanted to convince himself that everything was going well. The Warm Up is always the last time you are on the bike before you start the race, so it was an important moment. For the race, the exit of the grid was bad, but he recovered in the first chicane with an incredible braking maneuver and later on, we saw that Johann was struggling with Lorenzo in acceleration and he had to make up the whole time lost on the brake. Then Marquez came back and they started a three riders battle. I think Johann just kept the brake a bit too much and lost the front. Sure, afterwards you think it was not necessary to try to pass Lorenzo so early, as when the bike gets a bit lighter the pace would have come. I believe there was a podium, but I’m not a guy of ‘if, if, if’.  So, we learned, he learned, especially because it’s a shame to do your first DNF after 21 consecutive points finishing races in your home Grand Prix. Anyway, thanks to Johann, thanks to the entire team. I’m sorry for the fans, because they were all dreaming and waiting for at least another podium and we couldn’t deliver, but that’s unfortunately part of the game. We try again next race in Mugello, which could be a bit difficult with the long straight. On the other side, we are very, very happy with Hafizh, who is back to his normal form and was the best rookie. Unfortunately, he lost a lot of time behind Morbidelli, otherwise I think a top 10 was highly possible, but the 12thposition and four points is great. Some tests in a few days in Barcelona will for sure help him to understand his MotoGP bike even more, but we are truly pleased with what Hafizh has been doing all weekend long. All the time he has a smile on his face, he is learning and shows a great attention to everything the team is telling him, plus good speed. Finally, we are very proud of him. Let’s pack everything now and head to Barcelona for the next test.”

Monster Yamaha Tech3 star Johann Zarco delighted his home fans today in Le Mans with snatching a super pole position ahead of his and the French team’s home Grand Prix tomorrow. The local hero timed his new pole record at the Bugatti Circuit to perfection, securing the top spot during the last minutes of an awesome exciting qualifying and is therefore, the first Frenchman at the front of the first row on home soil since Christian Sarron in 1988.

On the other side of the Monster Yamaha Tech3 garage, Hafizh Syahrin did an equally great job. The MotoGP rookie delivered a stunning performance and missed out on Q2 by just 0.336 seconds. The Malaysian eventually secured the fourth position in Qualifying 1 and with it his best ever starting position until now. He’ll launch the French GP from the middle of the fifth row on Sunday at 14.00 local time. 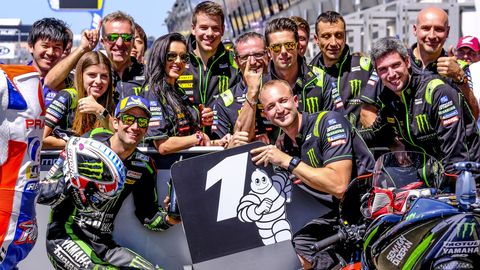 "It feels great and it’s very emotional for me. I didn’t expect to have these emotions already during Qualifying here. For sure, I wanted to be fast, but when I saw the 31.185 on the dashboard I was surprised myself. The first run was already quite good, but I felt that the new tyre can deliver even more on the first lap, so I tried it for the second exit and it worked well. The job we did, working with different tyres, is amazing. A huge thank you to the crowd here, because they gave me a lot of positive energy. Let’s see, if this energy is enough to win tomorrow." 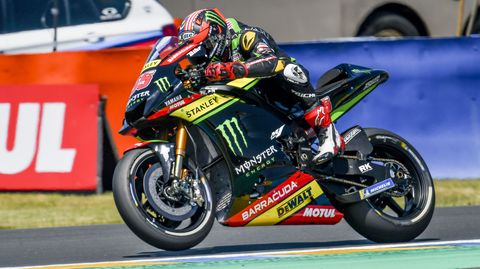 "We did a very good job on day two. In FP3 we improved an also in FP4 we went better. Also myself, I have more confidence on the brake. I want to say thank you very much to my team, because they always do a fantastic job, they try to pass me their experience and this is very helpful. I can do low 32’ and I was very close to Q2, anyway, it’s my best qualifying and we try to keep the consistency for tomorrow’s race. I want to avoid to do any mistakes and bring home as much points as possible for my crew in their home race."