Monster Yamaha Tech3 star Johann Zarco delivered a solid third round of 2018, fighting for the podium at the beginning of the race. A few struggles over the course of the weekend at the demanding Texan venue didn’t prevent the determined Frenchman from battling bravely to eventually cross the line as the fastest independent team rider in 6th, taking home precious points in the World Championship.

On the other side of the garage, Hafizh Syahrin overcame a scary moment this morning and started his third ever MotoGP race with high courage. The Malaysian rushed forward in an incredible way, making up four positions on the first lap, before he challenged some more experienced riders, but unfortunately did a mistake in turn one on the eighth lap to finish the race early.

While Syahrin is still the leading rookie of the MotoGP World Championship, Monster Yamaha Tech3 claims the top of the independent teams with 47 points, before settling over to Spain, where the European season is set to commence in less than a fortnight. 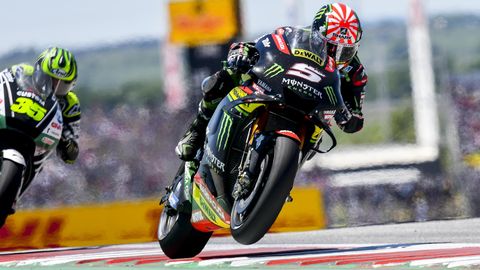 "It was a difficult weekend. After a good qualifying, I didn’t start well. Before the race I was crossing my fingers for the podium, but I think the others just did a better job. I knew where my weak points were on the track, but I tried to maintain the gap and play with it, but it was too difficult. This doesn’t mean I struggled with the tyres, because the pace from the start till the end was quite constant, only not fast enough. When Dovizioso overtook me a few laps to the end, I couldn’t match his pace. I expected to fight with him, but my weak points were worse than his. So, it means finishing sixth, when I’m struggling a lot is a lot better than nothing" 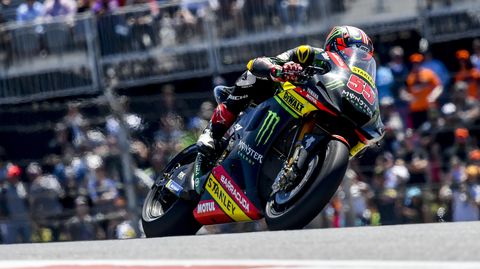 "I felt really strong at the start of the race, but maybe I was pushing a bit too much on the brakes. I had some great sensations and a truly good pace, but honestly, I’m a bit disappointed for myself. This morning we had a huge crash and didn’t try a different setup, therefore we had to go back to the Free Practice settings and the bike was quite soft. Anyway, I was one of the strongest rookies on this difficult track, but leaving it a bit defeated to lose the points of round three. I just lost the front, which was maybe because I tried to fight with a Ducati, which is very fast on the straight, so I tried to make up for it on the brake. Yet, I’m sure to be back strong at the next race."

“We knew this track was not the easiest one for us, plus the weather didn’t help. Overall, it’s been a tough weekend, but I think Johann as usual and as always showed great determination, worked really hard, pushed hard and got a fantastic qualifying position, that allowed us to eventually start from the front row. He had a good start, but we could see that the top 4 guys had a better pace than us. Then we concentrated on keeping our head down. He did that very well, but we also knew that Dovizioso has a strong bike, is a clever rider and to be in front for so many laps is never an advantage. We could understand that we’re going to lose the battle for fifth, but very wisely Johann took the 10 points for sixth, finishing as the first independent rider. A full factory bike has clearly an advantage on a track like this, so we are very proud. Now we arrive in Europe, where for sure Jerez and Le Mans will be more favorable for us and we can only go back to Europe happy with the job done so far this year. On the other hand, I feel really sorry for Hafizh, who did another excellent weekend. It could have been a really strong finish, but the crash in the warm up trying a new tyre brought him almost out of contention. Bravely he wanted to start the race, he did, he was fast, up to eleventh position, but he made a small mistake that caused him the crash. Anyway, he is still leading the rookie classification, which we are very proud of. He’s learning and I think will be very strong in Spain and France. Get well soon, Hafizh, look at your body and recover well! See you all in beautiful Andalusia!”

Johann Zarco showed his brilliant talent again on qualifying day at the Circuit of the Americas. The Monster Yamaha Tech3 rider upped his pace in every outing, following some tricky practices on Friday on his way straight to Qualifying two. During the all-important timed session, the French star was nearly three seconds faster than on Friday morning and snatched fourth position in order to head the second row on Sunday.

On the other side of the Monster Yamaha Tech3 garage, Hafizh Syahrin improved well over the course of his second day at the ultra-demanding Texan track. The Malaysian MotoGP rookie started Q1 with the fastest lap time and eventually ended up in P6 to bolt forward from the sixth row when the green lights will go out for the third race of the season at 14:00 local time tomorrow. 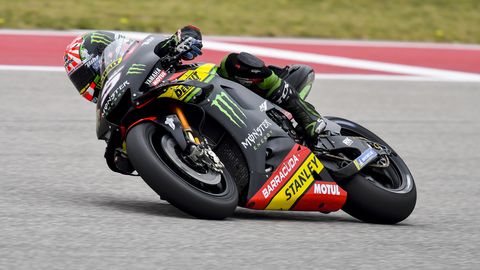 "I’m really happy, because yesterday has been quite difficult. This morning, I was glad to find dry conditions, so I was able to push a lot in case of rain. Finally, I got a good lap time for the qualifying and now in this session, I used two medium tyres, because we don’t have some extra grip with the soft ones, it’s almost even worse. This disturbed me a bit yesterday and also today, it was quite strange. Anyway, we were able to manage it well and it’s great to be competitive. Fourth position is a good base for the race, so tomorrow I’m going to push for the podium and I really hope I have the pace to do so. I want to rest myself and try to keep the pace until the end of the race." 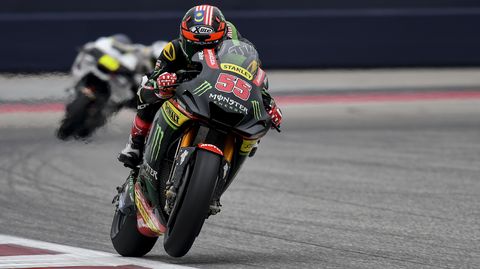 "I felt really good in Qualifying one and had a good rhythm, but to be honest, I was quite disappointed in the end, because I did a mistake in my strategy to take reference of the riders in front trying to catch them. In the last lap, I didn’t see the chequered flag, otherwise I think I could have been better. Anyway, it’s ok. I’m really happy with the bike. Now we’re looking forward to tomorrow, we try to have a good setup for the race, because I still lose a bit too much grip with the used tyre and aim to have a good race rhythm, so we’ll see."

Zarco and Syahrin wrap up day 1 at the Americas GP

Monster Yamaha Tech3 rider Johann Zarco concluded the opening day at the Circuit of the Americas in 13th position, following a significant improvement of 1.191 seconds from FP1 to the FP2 in the course of a quite tricky day. Yet, the French star is eager to increase his pace during the third Free Practice, which commences at 9.55 local time tomorrow.

Meanwhile, Hafizh Syahrin initially had to learn one of the most demanding tracks of the MotoGP calendar aboard the Yamaha YZR-M1. The premier class rookie mastered his task to perfection, lowering his lap time by impressive 2.6 seconds from the first session to the second, which made him earn the top rookie honors again by the end of day one. 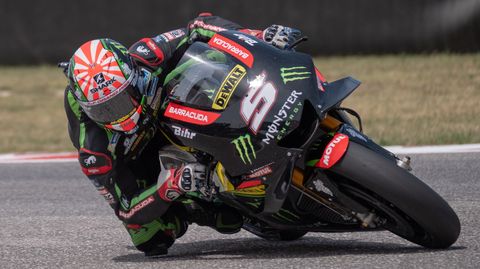 "This was a difficult first day in Texas. This morning I was unlucky with some mechanical issues, so I couldn’t work like I wanted. In the end, the laps I did were quite good. In the afternoon, we were honestly struggling a lot. During the practice, I had some good feelings and I thought we could improve with the soft tyre, but finally it has been even worse with the soft one. It’s kind of strange and it’s a pity, because we are not inside the top 10. I hope that it will be dry, so I can push during FP3 and over all be able to have a good bike and find my pace." 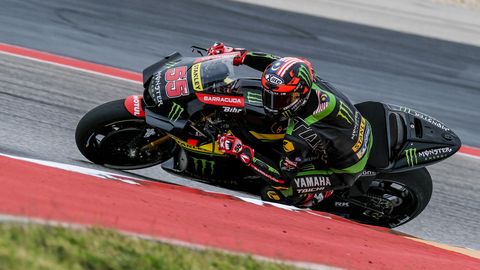 "I felt really good in FP2, we improved a lot. Eventually I had some great sensations. By the end of the session, I was very close to Lüthi, but Nakagami crashed in front of him, so we both had to slow down, which was unfortunate, because I had a lot of confidence with the bike and I think I could have been even faster. In the end, it was a mistake in planning my strategy, but I think that I can do better tomorrow. I hope the weather stays like this and we can get closer to the front in the course of the weekend."