Johann Zarco came off the line well to fight inside the leading group from the beginning in one of the most exciting races ever. The French star got the very best out of himself to storm to second position, earning the honors of a first podium in 2018 as the top Yamaha rider.

On the other side of the Monster Yamaha Tech3 garage Hafizh Syahrin performed in an outstanding way. The MotoGP rookie made up eight places in just his first lap and was threaded his way through the field of the much more experienced competitors to eventually see the chequered flag as the best rookie in ninth. 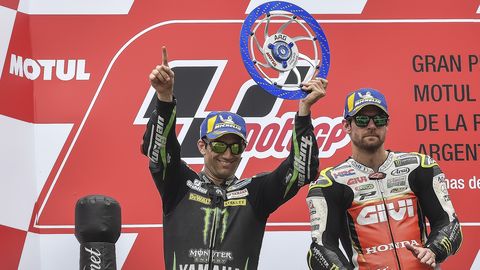 "It was a pretty difficult race, overall when we had to choose and then the delayed start was quite good for all the riders. Just Jack (Miller) chose the slick from the beginning. From the start there were not so many options for the best line, but behind Dani (Pedrosa) I felt I was stuck, so finally I did the maneuver, tried to overtake him. Because of the conditions I went a little bit wide, but that was the way to pass him. I’m sorry that he crashed there. Overall it was a very difficult race today, I was almost crashing. I did my maximum from the start to the end. In fighting with Cal (Crutchlow), I didn’t want to do a mistake, so in the end, he deserved this win today. I’m really happy, that I was able to catch this second place!" 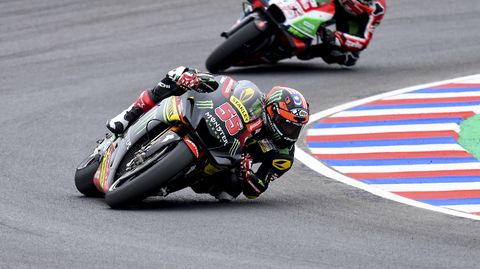 "I’m so happy about the result today! I pushed really hard all the weekend, the team did a very good job. I felt truly strong this weekend, we only struggled in qualifying, because I didn’t find good grip to stop the bike in a decent way. For the race I was fully motivated, I pushed and when I saw that I was in P15 after the first lap, I was surprised. My pace was really strong and I was able to follow the Factory Yamaha quite easily, but it was difficult to pass the Ducati, because it’s very fast on the straight. I tried it many times, but it was not possible. In the end P9 is a really amazing result for me, I have a fantastic feeling with the team and want to pass my congratulations to Johann for his podium. We are very happy and leave Argentina with a great result. I hope I can do also a good race in Austin and will continue to work hard on myself."

“This was an incredible weekend! It was very tense tough and very difficult to cope with the crazy weather we had here. I think everybody was worried, start delayed, will it rain or not, it was difficult, but to finish a weekend like this in that way, is just unbelievable. The tension was so high. Johann did again an astonishing race, full of speed, but also full of wisdom. He is showing race by race, that he is mastering his emotions, that he is studying his rivals and he did the perfect race, almost perfect, because completely perfect it’s just, when you are winning. I’m very proud of Johann and of the whole crew. Thanks to Yamaha for that great bike they are giving us. Today we almost got that elusive win, we are chasing, but fair play; I think Cal was a little bit stronger. Congrats to him. I can’t stop here without saying huge congratulations to Hafizh Syahrin, who did an exceptional weekend without any mistake. He was just a bit too nervous for the qualifying, so he could not show what he was expecting. But starting from almost last to finish the race in ninth position, fighting with all the factory guys, I think this is something that is going to boost his confidence. I’m very proud of him and I’m very proud to have selected him for the season, because he is showing, that when you have the right attitude coming from this fantastic Moto2 class, you can have a lot of dreams.”