Johann Zarco phenomenally sealed the pole position ahead of the first round of the 2018 season with the fastest ever lap on two wheels at the Losail International Circuit. With his remarkable time of 1’53.680 minutes, the superb Monster Yamaha Tech3 rider broke the 10-year-old track record at the venue in Qatar, after going straight through to Q2.

On the other side of the Monster Yamaha Tech3 garage, Hafizh Syahrin concluded his third Free Practice remarkably well inside the top 15. In his first ever premier class qualifying the Malaysian rookie showed an extraordinary effort to maintain the 15th position and is eager to start his first race in the MotoGP category from the fifth row on the grid, when the lights go out at 19:00 local time tomorrow. 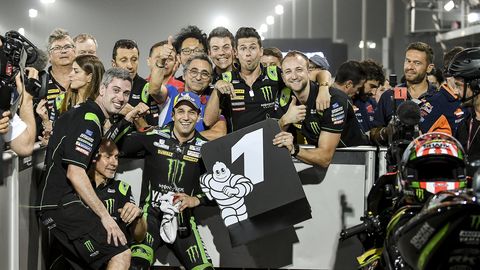 “I’m really happy, it’s truly the best way to start the season. I had a crash in FP4. I came away with no harm, but it’s not funny to be down before the qualifying. Anyway, I knew that with new tyre and light bike, I feel good and since this morning, I got back my feeling, that I had during the test here. Beating the lap record makes me really proud. Tomorrow is the main day. I want to try to win, try to be on the podium. It looks like my pace over the distance is not the best one, but at least starting from pole is the best chance to catch a good result.”

“I felt really good today. I think I could have done even better, because in turn nine I went a little bit wide. Without this, I’m sure I would have been able to be a tenth of a second faster. But anyway, the 15th position to start my first ever MotoGP race is really great for me. Apart from that, I’m also very happy about the great work inside the team. Now, I fully focus on the race and hope that I won’t do any mistake during the 22 laps.”