Johann Zarco impressively sealed his fourth consecutive front row start with a superb performance in the last qualifying shootout of the season. The French star began the day with instant speed after finishing FP3 in 2nd. Then, in QP2, he blazed to a personal best that left him as the leading Yamaha rider on the grid, and confirmed his sixth top three qualifying result of the year. The top Independent rider seeks to clinch a podium tomorrow to end his debut season in MotoGP on a high.

On the other hand, Michael van der Mark produced a relentless effort today as he progressed in every session before qualifying on the ninth row. The stand-in rider seeks to undertake a strong start tomorrow and then challenge for a point scoring finish as he makes his second appearance for Monster Yamaha Tech3 whilst stepping in for the recovering Jonas Folger. 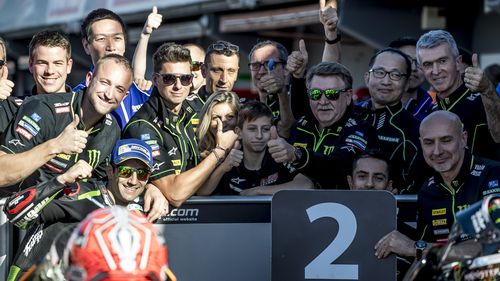 “It was a great qualifying performance. I started quite well with a 1’30.5 lap time, but then it got to the stage where it was tricky to go faster. However, we changed something on the bike, which allowed me to do a 1’30.2. It was not possible to match the pole time today, yet, I think that even though I couldn’t do this, I will be able to run a very solid pace in the race tomorrow. Plus, I hope to have a good battle. There will be a lot of riders who will be quick and they all want to win or go for the podium. So I will be ready to fight, and I'll use this second place qualifying result to stay at the front. It will be 30 long laps but I think I can run the pace that I need to and stay focused. In addition, I must keep my energy until the end.”

"This morning we made some changes on the bike and I started to feel better and better. I was still getting used to the YZR-M1 and I didn’t feel totally comfortable on it yet. However, we made steps forward and towards the end of the session, I cut my lap time again, not as much as I wanted to, but I was still happy. In FP4 I tried two different bikes and we found one with a slightly better setup so I was able to run good lap times on used tyres, which was satisfying. In qualifying, I improved again on my first lap, and then, at the end with new tyres, I did the same lap time. I am pleased that I made progress in every session, but I wanted to make bigger steps. We need to find a better riding position for me, and we also have to adjust the bike a bit more for my style and feeling. The team are working really hard and we are advancing every time we go out on the track, which was my goal, but I hope that tomorrow in the race, we can make another step and then fight with some of the guys in front of us."